The Smoke City Betties had fire in their eyes as they brought the heat in the Bout at George Bell Arena Saturday night burning the Death Track Dolls by 30 winning 117-87.

Memphis Kitty lead the scoring for the Betties and Jewel Kicker was the lead Jammer for 6 of the 9 jams she was in, scoring 29 points, while Land Shark was a huge factor for the Death Track Dolls.

Jewel Kicker started off the bout for the Betties and got the team rolling right off the bat and discussed the game and the team with me after the Bout “It was an exciting game I mean we always thought of ourselves as being very evenly matched with the Dolls they’re a good team and we practise with them quite a bit, but it was pretty clear that it was our game today, everybody was on, all of our Jammers were just going for it, slicing through the pack, some of their big hitters went down early in the game like Audrey Helborn…whenever you can take out a big hitter like that even if it’s for a few Jams it certainly helps.”

One of the key components to the Betties win was Blocker Dyna Hurtcha who always seemed to be knocking one of the Death Track Dolls Jammers down as they tried to get ahead of the pack, she said of her role “Always looking behind you, that’s one of the most important things, the game happens behind you, what’s in front of you is irrelevant, because the jammers are coming up from behind you, so always look behind you and distract the other team by knocking them around, and when the Jammer comes, Hit her!” She also said about the hitting “That’s my Job that’s what I gotta do!” She obviously knows how to take care of business and by the huge smile on her face while I talked to her she relishes the role!

One of the Death Track Dolls, Land Shark, was the Jammer 17 of the 41 jams and was definitely a work horse for her team, scoring 33 of their 87 points, while becoming the lead Jammer in 10 of the 17 jams she entered along with being involved in numerous collisions with the aforementioned Dyna Hurtcha. She talked to me about the Bout saying “It was a lot of fun! There were a lot of hard hits, I don’t know what I was expecting with the Betties because, they have a lot of really good new people, and they seemed to work really good together, I thought that we would totally win, we seemed to be playing really well and not getting the points, that’s how I felt, but it was still awesome!” Jewel Kicker mentioned that “Sharky puts her whole self into it…” which was apparent by the way she battled on the track.

I am sure the Death Track Dolls are looking forward to their next Bout, where I am positive they will come out hungry for the win, as for the Smoke City Betties they will obviously look to continue their early success and tough style of play mixed with the agile moves and speed they bring every Bout.

The ToRD will be moving venues, so check out their website for more information on that and other Roller Derby events www.torontorollerderby.com (Stats are unofficial)

The attire remains the one common theme, but the days of scripted WWF staged style roller derby has long been buried and this new battle ready breed of Pivots, Blockers, and Jammers has brought a new face to a century old game.

The bright green clad defending champion Chicks Ahoy took a twenty point lead in the first half, in front of a packed George Bell Arena, with their Jammers, leading off with Candy Cross Bones who began the scoring, seemingly slipping past the pack of Blockers and Pivots of the Gore-Gore Rollgirls at will. The leopard print of the Gores must have seeped though their uniforms and engulfed their spirits as they snatched the lead for good with ten minutes left in the second half finalizing the score at 93-87, and thus making the statement that they are now the force to be reckoned with in the ToRD.

Bambi lead the way for the Gores scoring a total of 38 points including 4 Grand Slam Bonus points, followed closely by Lunch Box with 36 and 5, while D.Rail lead the team in hits with 18. The Chicks Ahoy Jammer Candy Crossbones scored almost half her teams points notching 35 and Nasher the Smasher had a total of 19 hits in the losing cause.

Some of the hits in this game, played on cement, were, both feet off the ground flying into the boards, a good ten foot plus, heavy collisions. The minimum amount of protection including a helmet, wrist guards, elbow pads and knee pads worn by these women don’t cushion that much of an impact, tough chicks! I asked the Gores Jammer Lunch Box about one specific massive hit she took and she said “Yeah, which one” while laughing, and about the impact it had she replied “I had to get up so I could keep jamming.” One of the combatants was taking off in the first period on a stretcher but would return to battle on, though was limping after the game, verifying their motto, which reads… Real Women. Real Hits. Real Heart.

The Gore-Gore Rollergirls were ecstatic about the win and their Co-Captain and a key Jammer Dust Bunny talked about it saying “It feels amazing because we both have something to prove against each other, we’ve been contending champions for two years, so hopefully that sets the record on how this season is going to be, and hopefully we are going to be the champions this year!”

This sport provides constant action and truly kept me on the edge of my seat, I can’t wait for the next match, which gets underway Saturday June 13th at George Bell Arena at 7:30 pm. Get down there and check it out! www.torontorollerderby.com

All photos by  Paolo Cescato  www.cescato.com except photo of king and the Roller Girl interview by Mike Ivall 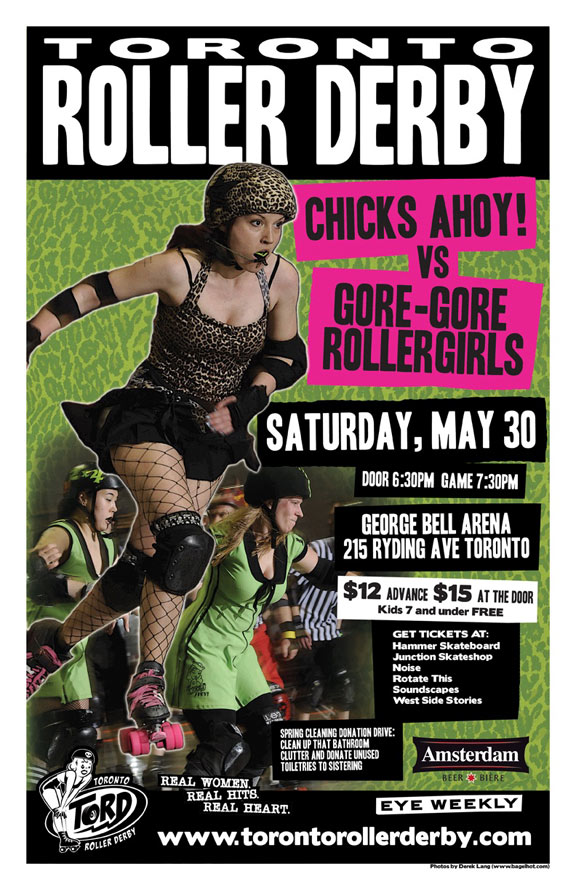 Roller Derby dates back to 1885 when six day bank track races were run, but the term was actually coined in 1922 by the Chicago Tribune while covering flat track races. A promoter, Leo Seltzer and a sportswriter Damon Runyon brought it around from the endurance races and swung it towards more of a contact sport. Roller Derby has had its fair share of ups and downs, with the business aspect as well as on the track, finally finding itself outside looking in during the mid 70s. Recently the sport has re-emerged and has found fans again around North America.

The Toronto Roller Derby League kicks off its season Saturday night at George Bell Arena with the Gore Gore Rollergirls facing the Chicks Ahoy, in a bout to be remembered. This will indeed be quite a battle with each team boasting a record of 4-1 from last year and obviously looking to start the season on a winning note. See ya down there for the wild action, details can be found at www.torontorollerderby.com