Buckets Off: Bring Back Hockey Hair 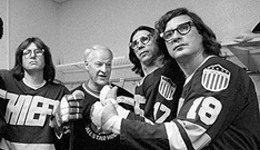 2008 is just a memory, still I cannot help but feel as though something was missing. While I do not doubt the intensity and passion that the players possess, I am still finding a void between the way the game is played now and the way it was before the new rules. The so called evolution of the game has made it a super pest’s paradise, a one way street where a cheap shot will be policed by the referee but not an enforcer, the ones who really kept the game clean and their opponents honest. Thanks to the rule changes implemented by Gary Bettman while riding his high horse (located on a merry-go-round at Disney World) there are more head injuries in hockey. Now players with big equipment can run around and play dirty at such a high speed without a true fear of retribution because the enforcers are sitting in the stands at this time of year.

Another thing I am truly tired of is when an injury occurs the media begins rallying for a public outcry to make more rules. The league should have left the game as it was instead of trying to sell it to a market where NASCAR reigns supreme and the only car wreck the NHL had in the southern market resulted in a trade to the Ottawa Senators.

The media’s attitude even seems to be rubbing off on the players. Every time there is a penalty the penalized player whines to the on ice official about the call, something that would not happen if players had more important things to worry about like having to actually be accountable for their actions ala “Old Time Hockey“. Suspending a player today is like sending a kid to his room because dad is not home to administer a spanking. Oh and did I mention the kid has a TV and an X-Box in there that he bought with his new endorsement deal?

Many people love the new changes which is great but pretty soon players will be using sticks made by NERF. With the exception of banishing the instigator penalty, (who is in charge of getting that rule changed, Mike Danton? The guy couldn’t have done a worse job getting David Frost whacked if he called Bret “Hitman” Hart) if I was allowed to make one rule it would be the expulsion of helmets. The loss of helmets would bring back a level of vulnerability to the game and make teams play with an element of respect that hockey is sorely lacking. There would be fewer head hits due to the fact that there would be a greater risk of something happening to him in retaliation. The loss of the helmet on a lighter note would also bring back hockey hair. A healthy head of long hair has long been associated with power and can even be traced back to biblical times with the story of Samson and Delilah; once Samson had his hair cut off he was no longer a dominant warrior thus losing his edge. While hockey hair still has its place in the game, it is no longer allowed to flow and flourish as a result of the helmet regulations that the league decided to grandfather in. Although it is an issue of safety that seems like it is for the better, it is the one major piece of equipment that leaves players feeling invincible. NHL players today could leave their engines running, talk on their cell phones, and smoke at the gas station all at the same time and still would never be as daring or grit as Craig McTavish when he took to the ice. I say get rid of the helmet and let the 70’s style hair take back its rightful spot in hockey. The only person who should be forced to wear one is Gary Bettman so he doesn’t fall of his magical power pony at Disney World and hurt himself while making another mentally challenged decision to tarnish this great game. Get rid of the helmet. Its time to clean up the league so players can sport hockey hair and respect what my dad calls “Sherwood Shampoo”; something I think would work and I’m willing to place a bet with Rick Tocchet.