Cheick Kongo to Mostapha Al Turk: A Ball for a Ball 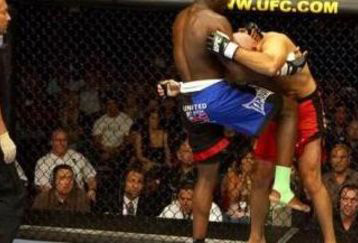 It takes something special for a grown man to yell out the phrase, “Oh momma!” to his television screen. The annual Victoria Secret fashion show is one. The annual Lingerie Bowl is another. A man receiving a vicious knee strike to the testicles the other.

Just under three minutes into the first round of fight against Mostapha Al Turk at UFC 92, Kongo received an unintentional knee strike to the groin. A strike sufficient enough for the heavyweight to take some of his allowed five minutes to regain his composure, and for his testicle to drop out of his abdomen.

Fight again began, the slightest high pitched sigh could be heard from the newly crowned soprano Kongo, who avoided going for the clinch in favor of protecting his reason for living.

The two fighters pawed at each other as Al Turk seemed to be having no success at taking Kongo to the ground.

About a minute later, Al Turk found himself on the receiving end of an “unintentional” knee strike right to his goodie bag. Referee Steve Mazzagati separated the two fighters and could be heard saying, “I hope that was an accident.”

Al Turk too took a bit of time to get the taste of his own ball out of his mouth before fighting resumed. Kongo eventually won the fight at 4:37 of the first round, which made for one of the longest first rounds, just over seven minutes, in modern UFC history.

There is no doubt that there was some extra ice needed by both fighters in the locker room after the fight.

So, was either knee intentional? You be the judge; see the video here.

The Funniest and Dirtiest Athlete Names in Sports History

by Jon Grilz… Children can be very mean. The first thing that they have to look at and pick apart is a person’s name. They will be vicious and make you hate your parents for giving you even the most common of names.

However, as bad as some people get made fun of for their names, athletes can have a much more difficult time since they are in the public eye.

Here is a list of some of the saddest and, therefore, most wonderful names in professional sports history (in no particular order):

His name has the word poo in it. That’s awesome!
- Former Quebec goalie Ron Tugnutt

Famous for his pinch and roll maneuver

No one streaked down the runs like she did

He was no stranger to rounding third

His family is of English decent, where they are known as cigarettes

Her maiden name was Tightknees

The guy is, like, 70 and I’m still scared to make a joke here

Guess what his mom was called…

The first racer to be sponsored by a colostomy bag manufacturer

Actually, a common name in 40s due to the Baby Boom

Yes, this is real. No joke needed

The first player in NCAA history to get a sexual harassment allegation for introducing himself.

by Jon Grilz… On Friday, Hall of Fame running back/murderer O.J. Simpson was found guilty of kidnapping, armed robbery and 10 other charges that could land him in jail for the rest of his life.

Last year, Simpson slashed his way into the headlines for his role in gathering up five men and leading an assault on a Las Vegas hotel room where they seized several pieces of memorabilia that Simpson claimed was stolen from him.

Prosecutors say that two of the men were armed with guns (not knives capable of decapitating a woman and a man). Simpson showed little emotion as he was handcuffed and escorted from the courtroom after the verdict was read. It was almost as though Simpson had been desensitized by some brutal, blood and utterly macabre spectacle at some point in his past.

Per the Associated Press, “Simpson said he felt melancholy and that he was ‘afraid that I won’t get to go to my kids’ college graduations after I managed to get them through college’… even after I had decapitated their mother… I mean, cut her throat… I mean, tried to find a murderer while golfing… God damn it!”

While the Associated Press is only willing to recognize the first half of that quote, many analysts believe that it much funnier to go with that entire quote.

As for Simpson’s charges, kidnapping is punishable by five years to life in prison. Armed robbery carries a mandatory sentence of at least two years behind bars, and could bring as much as 30. Which, if Simpson were still an active player in the NFL would all be reduced to probation and a three game suspension.

In closing arguments, Simpson’s attorney Yale Galanter “acknowledged that what Simpson did to recover his memorabilia was not right. ‘But being stupid, and being frustrated is not being a criminal,’” he said.

Accordingly if it were true, every single Oakland Raiders fan would be serving life sentences. However, most NFL fans admit that being a Raiders fan is punishment enough.

For now, Simpson will sit on the razor’s edge as he waits for his sentencing date on December 5th. And while some believe that the reading of the verdict cut deeply, it is safe to say that the sentencing process is going to go straight for the jugular.

Only time will tell if Simpson will cry bloody murder when the sentence is handed down or if tear will flow as if gushing from an artery. But one thing is for sure, this writer has to end the article because he has no more euphemisms for Simpson being a throat cutting murderer and overall douche bag.