The Ultimate Raptors Team: A Look Through The Years At The Best

In the hustle and bustle after the first couple of waves of free agency there is always a lull before the season starts. While I am working on a Mega GBN with my good friend (and #2 Raptors Writer) Brandon Marsdin, I decided I wanted to take a look at how many good players the Raptors have truly had over their ten year history. So I will be compiling the ‘best’ players at their respective positions in order to come up with the Ultimate Raptors Team.

This one was relatively easy considering the Raptors haven’t really had a dominant center in their existence. Granted Bargnani is not dominant but he brings a wealth of skills to a position that other centers do not have. Camby started to become the defensive player he is after he was traded to New York, Rasho and Kevin Willis came to Toronto on the downside of their careers.

This is another easy choice as Bosh has developed quite nicely over the past six years. Bosh is one of the many players Toronto has had the pleasure of building the franchise around. With career averages of 19.6ppg and 9.2rpg he certainly has complied a great resume in Toronto (normally this would mean it’s time for him to leave). Keon Clark was good for his two seasons in Toronto and ironically enough he is a less offensive minded Bosh. Davis and Oakley were good for two seasons but were both well into their 30’s when they came to Toronto. Jerome Williams was a fan favorite as much as he was a rugged defender and rebounder (something today’s Raptors require), and lastly Sharone Wright was very underrated and if not for his horrific injury would have been more than a serviceable player.

Does any one really remember how skinny and lost McGrady looked when coming into the league and the vast improvement that followed? It was startling and astounding without a doubt. The ‘only if’ questions persist if McGrady’s immaturity and lack of a winning attitude had not gotten in the way of his own personal and selfish desires. The Raptors would have had a championship caliber team unquestionably. With that aside McGrady blows away a field of specialists, could-have-been’s and never-were’s

Even though I despise what Vince has done to Toronto fans with his lack of effort ‘Air Canada’ gets the nod as the franchise’s best shooting guard. With his flair, athleticism, and clutch scoring Carter lead the Raptors to the Eastern Conference Finals and to the playoffs three times. Despite his lack of effort in his final seasons in Toronto Carter is widely credited with putting the Raptors on NBA map, and bringing basketball into Canada’s mainstream conscience.

As the Raptors first ever draft pick the expectations and hostility were surrounding him as the fans widely wanted Ed O’Bannon (I love how that turned out). Nicknamed ‘mighty mouse’ Damon was a scorer first and passer second. The reason I have placed him in a tie with Mark Jackson is because Jackson underrated floor leadership, and passing ability allowed this team to achieve new heights. Basically Vince could have scored but Jackson got him the ball in the right places, and got everyone to hustle and to play with passion (something that is again lacking in today’s Raptor teams). I have to acknowledge street legend ‘Skip to My Lou’ aka Rafer Alston. He wasnt anywhere near the best not but he would widely be considered the first ‘streetballer’ to successfully convert to the NBA game (kind of). Calderon does not make the list yet until he can show some injury free seasons, consistency (he’s close I will admit) and learn to stay in front of his man. Horrific coaching killed what could have been for Billups. Ford thought he was a scorer instead of a floor general, and injuries ruined Alvin Williams career.

Agree or disagree with my selections? Sound off below.

The Opt-Out Brothers: Bargnani and Turkoglu & The Raptors 3 Year Window 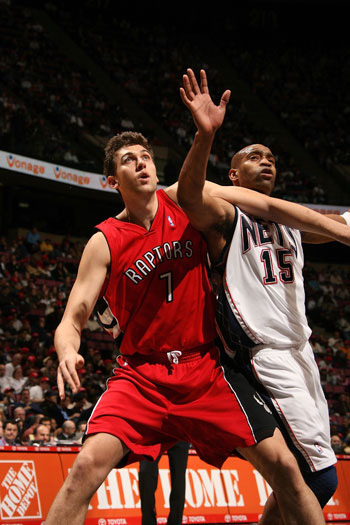 I would definitely say that the feeling in Toronto is beyond euphoric at the moment. Our fearless leader has certainly taken last year’s edition and turned it in to a dynamic athletic squad with toughness and improving depth. I would think that all would be well in Raptorland…except in looking at the new contracts of our newest toy Hedo Turkoglu, and the extension given to our still improving big-man Andrea Bargnani I discovered something that has caused me to re-evaluate the situation completely.

We are all aware of the contracts that players receive in the NBA they make more money than most of us will in our lifetimes, they come with perks like private jets, tickets for friends and family, specific accommodations on the road, and the list continues. While I’m sure that Bargnani and Turkoglu got those wonderful add-ons to their contracts there is one small problem: It’s called the early termination clause.

This clause cause Kobe to hold the Lakers hostage for more than two years, it allowed has saved Carlos Boozer from losing huge dollars in an economic depressed market. Frankly these clauses can unravel all the good will that can be built up during the course of the season.

Here is the breakdown Turkoglu’s contract can allow an opt out in 2013 that’s only 3 years from now granted it is unlikely he will re-enter the market considering that a 32 year old  ‘point forward’ will likely be able to command sizable contract although his skill set will begin to erode after two years (you heard it here FIRST). So it appears that the Raptors may not be as safe in that regard. Turkoglu is not a guarantee to remain a Raptor for the duration of his contract.

Bargnani’s contact poses more of a problem, as (I am assuming Bosh does not resign). A youthful Bargnani can opt out when he is 27. So basically the core of the Raptors would need to be rebuilt as Jack (provided he signs) contract will be complete, DeRozan will be seeking his first big contract at 22, Turk will be 33, Calderon will be 31. Four years does not seem like a large window in order to build a champion, only a reasonable contender.

So think about it we may have only three years of our ’savior’ Turkoglu and four total of Bargnani. What is there to be excited about. Remember the key to long term success in the NBA is not a open checkbook but continuity. The game has changed but three years does not a NBA champion make, again it’s just something to keep in mind.

While nothing is guaranteed in the NBA (where amazing, criminal, inept refereeing, and cover-ups happen) I have severely tempered my expectations based on this new information. It would have been great to not have to give these opt-out clauses to our key players but such is the nature of the business. It will be great to watch this team next year, and even the following one depending on who Colangelo will get in lieu of Bosh re-signing if he elects not to. However in year three I would be hard pressed to find a Raptors team at a championship level with the core aging rapidly and not enough youth other than DeRozan to be served. If this off-season is any indication I will withhold judgment against Colangelo until the time comes, as he has a way of foreseeing the landscape before any of us can.

Joey Graham to Cleveland? This Definitely Makes Them Contenders

Oh this is priceless, to the point where I had to write on it. BREAKING NEWS: The Cavaliers are looking at signing Joey Graham as only a ‘complementary piece’ at forward. Danny Ferry let me save you some time. Graham is not a star; he’s not even a second or third tier player. Joey Graham has been a complementary player his entire career and until the second half of last season had actually not displayed any type of reasonable talent to sustain an NBA career as a complementary player.

Joey Graham is not a bad person and he’s not even a bad player, however I’ve had the pleasure of watching him look and act completely lost for the past three years in Toronto. Have you ever seen a deer in the headlights? That’s Joey when you attempt to explain he has to go to the basket to be effective. Please Danny if you do sign him make sure you have realistic expectations: don’t expect him to be consistent or understand the nuances of the game you are paying him to play. However if you want a couple of soft rebounds, one dunk, and a bunch of other sequences that make you wonder, Joey is your man.

I can’t possibly understand why this type of ‘depth’ signing would be a boon, or positive addition to a Cavaliers squad that has underachieved for the most part (Lebron being the exception of course) nor can I quite figure out why the Cavs wouldn’t have made a more prudent signing like Ime Udoka, Rodney Carney, heck even Gerald Green would make more sense from a talent standpoint. (They are also likely a lot more cheaper to sign).

My conclusion: In Cleveland’s haste to build around Lebron and show him how serious they are they are they haven’t invested in the right player to play with him. As long as there is Lebron then the Cavaliers will forever be Lebron’s team. Everyone’s purpose is to compliment him, not dominate. While I am not an advocate of a player being able to dictate whom his team should sign or trade for in the off-season (Chris Bosh, Dwayne Wade I am looking at both of you)Lebron has this type of power in Cleveland. Clearly Lebron needs three things in a teammate: Shooters, Rebounders, and unselfish mentality. (This is why Varejo has been re-signed for a ridiculous amount to money he can do two out of three). Joey Graham isn’t two of these things and can barely do one; Danny Ferry you should be looking for players that can play with Lebron and make a contribution I’m sorry Joey Graham does not make the grade.